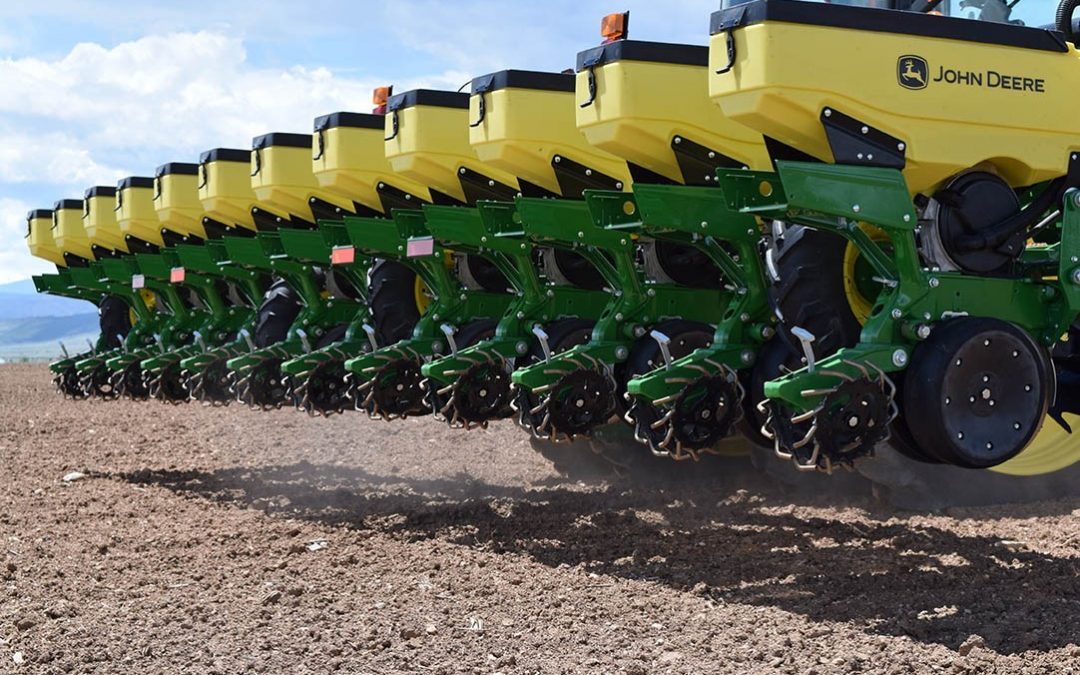 Silver Reef is no stranger to corn. On our land, we plant both grain corn and corn silage. Although they sound similar, when it comes to harvesting their processes are quite different.  Grain corn must grow until the seed has reached dent stage; basically, it has to reach full maturity. Silver Reef has decided to pursue a faster maturing grain corn, which on average takes about 80-90 days. Corn silage, on the other hand, is harvested before it reaches maturity, usually about three weeks before grain corn is usually harvested. This is because the kernel retains moisture if harvested before attaining maturity. Silver Reef has decided to plant a longer maturing silage corn, around 102-109 days.

This year, Silver Reef planted five varieties of corn in an effort to determine which selection works best for us:

In the northern Colorado area, grain corn is susceptible to frost come early September, so a low day corn is key. By planting early, and picking a corn that has a 79-81 day maturity window, we’re hoping we’ll be able to avoid this danger. In order to decide which option of grain corn works for our purposes, we’ll be tracking the bushels/acre for each variety. Our goal is to hopefully reach 175 bushels/acre for each type. We believe we have enough varieties to make a reasonable decision for next year on what variety and what day to use to ensure our grain corn reaches maturity.

When it comes to corn silage, for the past three years, we have gone with a 96-104 day corn. However, just this past year we’ve been told that a higher day corn––109 to 115––won’t necessarily make it to maturity, but it will produce a tall, leafy plant which will create more silage. And remember, we don’t need corn silage to reach maturity, so this is a good thing. So, for now, we can’t tell if this advice is sound, but as the corn continues to grow we’ll be able to have a better idea.

Now, it’s not just about maturity with corn. Population is also very important to consider when planting. Population essentially means how many seeds are put into the ground per acre and then, how many seeds are actually germinated. The optimal germination rate on all six of these varieties is 32,500. This can only be reached if the plant has enough room to grow and it isn’t too pressed for competition. Now, this perfect number cannot be reached just by luck. To get this germination rate, more seeds must be planted. Usually, Silver Reef plants between 36,000 and 38,000 seeds and so far, it has worked brilliantly. With only one field below our goal and the rest reaching, if not succeeding that number we’re happy! In fact, in one field we planted at 38,000 seeds and our germination was 37,000. Now initially that sounds great, right? Why wouldn’t it? Well, in theory, yes this would be great news, but in reality, this may be too much. With such a packed field, the corn may end up having too much competition for nutrients and water, not to mention space to properly grow. So, although it could be great, we don’t want to get our hopes up until this process is a bit further along.

With it still so early in development, much of what we have done is still an unknown, but stay tuned because we’ll keep you updated as the corn progresses!

This website uses cookies to improve your experience while you navigate through the website. Out of these cookies, the cookies that are categorized as necessary are stored on your browser as they are essential for the working of basic functionalities of the website. We also use third-party cookies that help us analyze and understand how you use this website. These cookies will be stored in your browser only with your consent. You also have the option to opt-out of these cookies. But opting out of some of these cookies may have an effect on your browsing experience.
Necessary Always Enabled
Necessary cookies are absolutely essential for the website to function properly. This category only includes cookies that ensures basic functionalities and security features of the website. These cookies do not store any personal information.
Non-necessary
Any cookies that may not be particularly necessary for the website to function and is used specifically to collect user personal data via analytics, ads, other embedded contents are termed as non-necessary cookies. It is mandatory to procure user consent prior to running these cookies on your website.
SAVE & ACCEPT